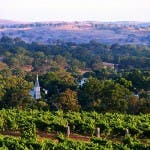 Adjacent to the eastern edge of the Barossa Valley, Eden Valley is not actually a valley. Allegedly, early settlers found the word "Eden" scratched into a tree and named the town Eden Valley. What we do know is that it produces fantastic riesling and chardonnay, having a cooler, higher-altitude climate than the Barossa. Reds of great merit come from here as well, with producers like Henschke dazzling tasters worldwide. Soil is dry and sandy, laying across windswept hills. A bit of a challenge for growers, with vineyards scattered throughout the region to take advantage of winter rainfall and the cooler temperatures. Altitude is 400-600 metres above sea level, providing cool nights and long warm days for growing season. Perfect for thin-skinned whites like rieslings, which benefit from lots of sunshine and cooler nights, but are susceptible to mould if the ground is damp at harvest time.

The township was founded in 1864 by William Lillecrapp (no snickering back there!). The family is still in the region five generations later, operating the Fernfield Wines Cellar Door. So behave! There is a sub-region in the south, High Eden, which is cooler still and kicks out some great riesling. Notable producers in the region are the aforementioned Henschke, who regularly frighten accountants and seduce tasters with their super-premium Hill of Grace Shiraz.
..
Published in Regions
Search
Categories
Related Products
© 2021 Wine Direct Pty Ltd. All Rights Reserved.