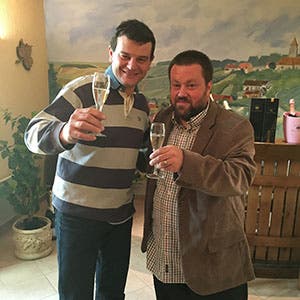 On the road in Champers Matt spent a fair whack of time at Bernard Remy. Here’s Matt having a glass with winemaker Rudy and Rudy filling a glass... even winemakers can’t pour straight! Check out the vid too as Remy and Virginie explain riddling, disgorgement and adding the secret Liqueur d’expedition. Champagne starts its life as a normal, still wine but the ageing on lees (dead yeast cells) and the final addition of liqueur, generally made from a blend of aged reserve wines and a little sugar transform it from the ordinary into something special. Wineries like Bernard Remy who start with much higher than average quality fruit start at special and work their way into magical territory.

Even winemakers have trouble pouring wine...

After quality of fruit, the time the wine spends on lees in the bottle makes a biggest difference to the finished product. The minimum period on lees required for a wine to be called Champagne is 15 months. Moet NV for instance spends 18 months on lees. Bernard Remy allow their Champagnes to spend between 24 and 48 months. This extra time on lees, combined with their superb quality of fruit allows the wine to build in complexity, body and depth of flavour. At about 14 months the breakdown of the dead yeast cells (Autolysis) begins to impart toast, nutty and shortbready characters to the wine. Extending this period sees these characters increase and the ‘bead’ or bubbles become finer. 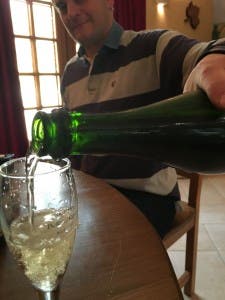