A Day on the Green 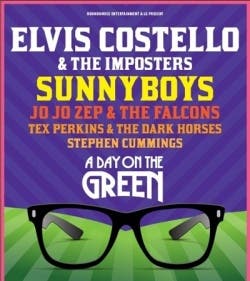 I was lucky enough to go to Day on the Green at Leconfield Wines, McLaren Vale on the 27th of Jan. A massive lineup starting with Stephen Cummings; a great songwriter but not on top of his game this day. Maybe he could have used a glass or 2 of the Hamilton Cab 2011. I had a couple on the day and it is looking particularly tasty. Sunnyboys belted out their melodic teen angsty pop-rock, and the band were all in fine form. Some seriously snaky riffs slithered off the fretboard. Jo Jo Zep and the Falcons were decent, apart from the Wilbur Wilde/Joe Camilleri schtick - trading fat jokes in the intro to ‘Shape I’m In’ which conjured memories of the Hey Hey It’s Saturday revival. They sure play nicely together with their horns out tho. Tex Perkins and the Dark Horses were loquacious and limber loosey goosey - with some ripper tunes, Tex in spectacular voice and swagger, James Cruikshank beautifully nuanced on the geetar … much like the Hamilton Slate Quarry Riesling, which is looking lovely. I’ll be buying some of that Riesling and I’ll be hunting down some of Tex’s back catalogue too. The other highlight for me was Elvis Costello and the Imposters. For a nearly 60 year old, Elvis rocks very hard indeed. The first 4 songs were full tilt, followed by a more laid back number he wrote with Roseanne Cash. With the exception of ‘Alison’, The rest of the show was back to rock and roll, interspersed with a bit of new-wave with its cheesy/humorous keyboards. The Syn Cuvee Rouge seemed a good match, plenty of body and tannin, but with enough sweetness to cut through. All in all an awesome day!
..
Published in Events , Featured
Search
Categories
Related Products
© 2022 Wine Direct Pty Ltd. All Rights Reserved.